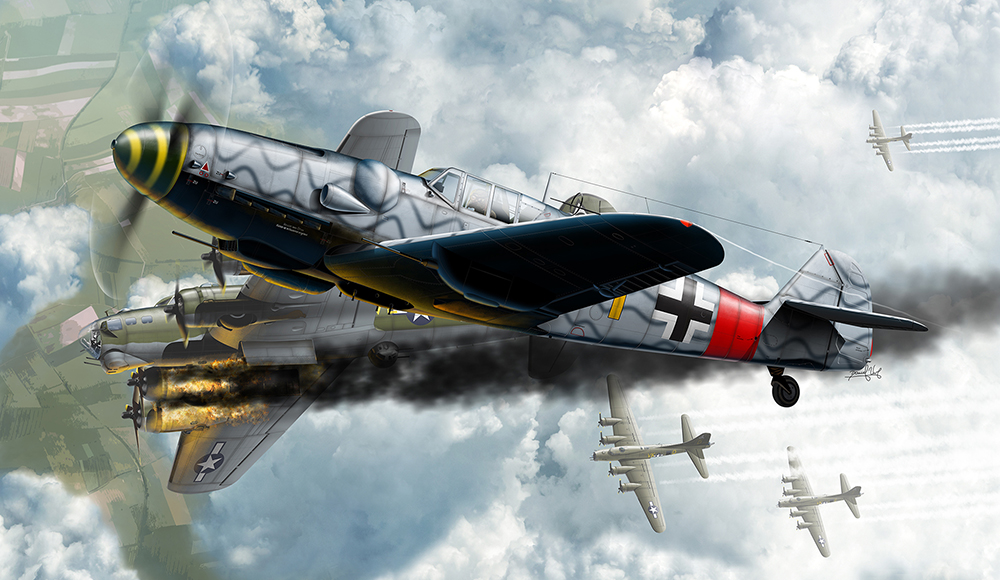 Originally the aircraft was designated as Bf 109 by the RLM, since the design was submitted by the Bayerische Flugzeugwerke (literally “Bavarian Aircraft Works”, meaning “Bavarian Aircraft Factory”; sometimes abbreviated B.F.W., akin to BMW) during 1935. The company was renamed Messerschmitt AG after 11 July 1938 when Erhard Milch finally allowed Willy Messerschmitt to acquire the company. All Messerschmitt aircraft that originated after that date, such as the Me 210, were to carry the “Me” designation. Despite regulations by the RLM, wartime documents from Messerschmitt AG, RLM and Luftwaffe loss and strength reports continued to use both designations, sometimes even on the same page.

All extant airframes bear the official “Bf 109” designation on their identification plates, including the final K-4 models. The aircraft was often referred to by the folk-designation, ‘Me 109’, particularly by the Allies.

The aircraft was often nicknamed Messer by its operators and opponents alike; the name was not only an abbreviation of the manufacturer but also the German word for “knife”. In Finland, the Bf 109 was known as Mersu, although this was originally (and still is) the Finnish nickname for Mercedes-Benz cars.

Soviet aviators nicknamed the Bf 109 “the skinny one” (худо́й, khudoy), for its sleek appearance compared, for example, to the more robust Fw 190.

The names “Anton”, “Berta”, “Caesar”, “Dora”, “Emil”, “Friedrich”, “Gustav”, and “Kurfürst” were derived from the variant’s official letter designation (e.g. Bf 109G – “Gustav”), based on the German spelling alphabet of World War II, a practice that was also used for other German aircraft designs. The G-6 variant was nicknamed by Luftwaffe personnel as Die Beule (“the bump/bulge”) because of the cowling’s characteristic, bulging covers for the breeches of the 13 mm (.51 in) MG 131 machine guns, with the separate Beule covers eliminated by the time of the G-10 model’s introduction of a subtly reshaped upper cowling.

The imge shown here is  Bf 09 G-6 R3 R6, Yellow 1
flown by Manfred Dieterle – Wilde Sau – Jagdgeschwader 300
Dieterle scored 10 to 13 victories, all of them assumed to be four-engine bombers (three British, with the rest American). He was awarded the 1st grade Iron Cross.