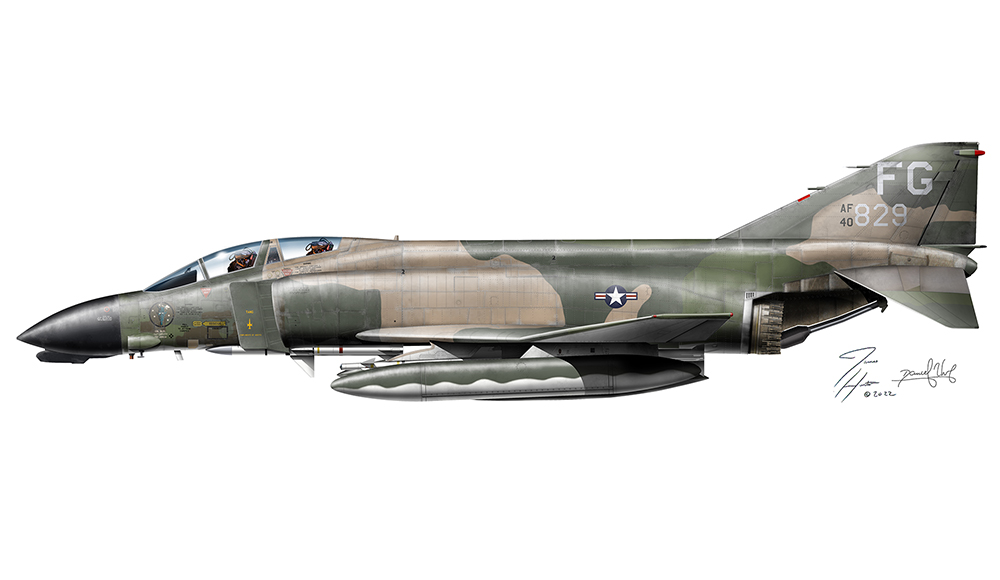 A new work I did.
New in different ways.
New – because I finished recently.
New – for being the first time I do an Phantom F4C, I always wanted it but for some reason never got it done, and
New – for one great motive, it was done in a partnership with James Hunter (illustrator) who has being helping me (a lot) in an other project that involves aviation art and history as well.

In this project (F4C)he did the lines, basis colors and markings. I gave the volume applying lights, shadows and weathering. I hope you enjoy it.

“To put some context on the way this is marked, this is Colonel Robin Olds’ F-4C 64-0829, the way it looked when it took off on May 20, 1967 on an Operation Bolo type mission. On that day Col. Olds and 1st Lt. Stephen Croker shot down 2 North Vietnamese Mig-17s. I used research by Jennings Heilig from the Large Scale Planes forum that he did to produce accurate 1/32 model decals, which I purchased, to help me do the markings on this plane. I changed some things that I felt were wrong from the photos that I found.

One key feature of this plane during this time was the strike camera modification to the “dork” faring under the radome. This was used to take pictures of the bomb target (front camera) and the strike area (rear camera), to see if the mission was successful. Most F-4Cs did not have this modification. The strike camera radome modification wasn’t replaced until sometime between 1973 and 1979. Also the low visibility formations lights seen on F-4Cs weren’t added until around 1972-1973, 5 or so years after this time period.

As to the Zap tag on the intake ramp, according to Jenings Helig, the 435th Tactical Fighter Squadron flying Lockheed F-104Cs was attached to the 8th Fighter Wing remotely based at Urbon AFB, Thailand. The ground crew for the F-104Cs applied the “Zap” tag to this aircraft sometime during their time there. There are several pictures that were supposedly taken after Col. Olds and Lt. Croker landed following the May 20th mission that shows this “Zap” tag. Shortly after the mission the tag was painted over and two kill stars were added to the intake ramp.”
Great-jimbo (www.deviantart.com/great-jimbo)