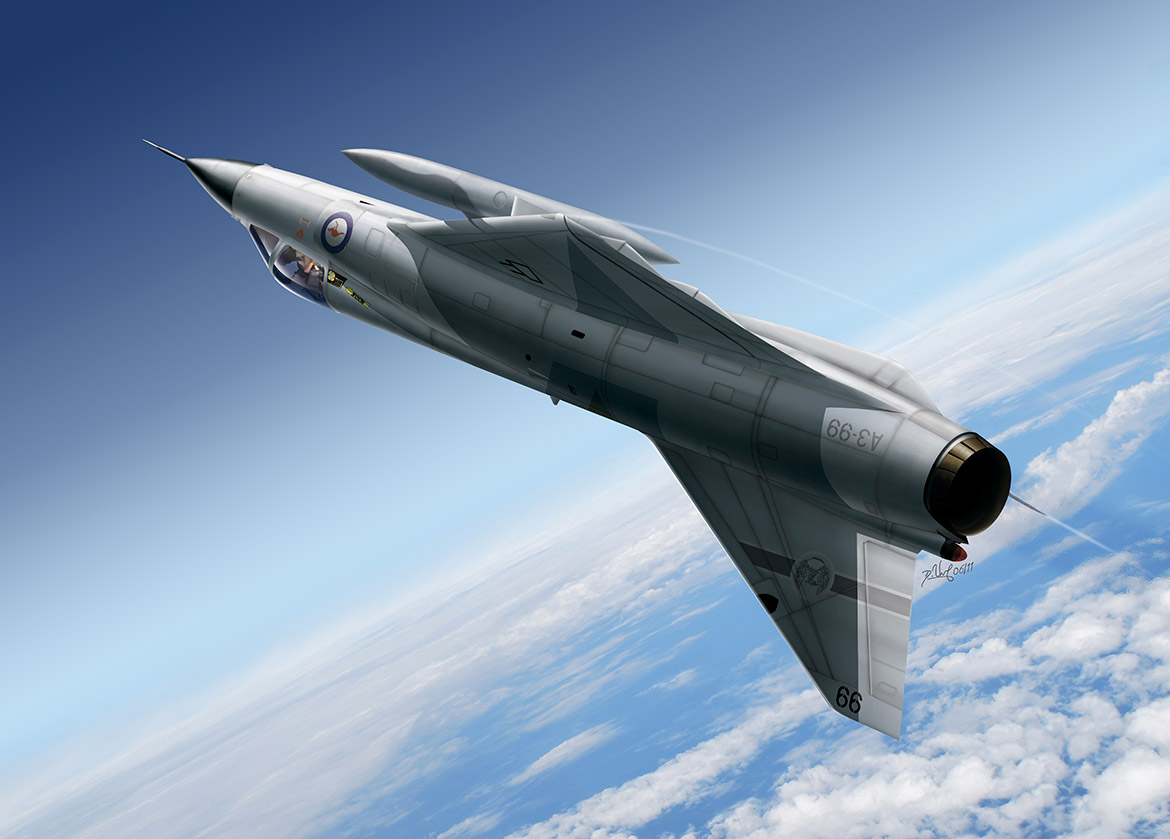 During 1952, the French government issued its specification, calling for a lightweight, all-weather interceptor. Amongst the respondents were Dassault with their design, initially known as the Mirage I. Following favourable flight testing held during 1954, in which speeds of up to Mach 1.6 were attained, it was decided that a larger follow-on aircraft would be required to bear the necessary equipment and payloads. An enlarged Mirage II proposal was considered, as well as MD 610 Cavalier (3 versions), but was discarded in favour of a further-developed design, powered by the newly developed Snecma Atar afterburning turbojet engine, designated as the Mirage III. During October 1960, the first major production model, designated as the Mirage IIIC, performed its maiden flight. Initial operational deliveries of this model commenced during July 1961; a total of 95 Mirage IIICs were obtained by the French Air Force (Armée de l’Air, AdA). The Mirage IIIC was rapidly followed by numerous other variants.

The Mirage III was produced in large numbers for both the French Air Force and a wide number of export customers. Prominent overseas operators of the fighter included Argentina, Australia, South Africa, Pakistan and Israel, as well as a number of non-aligned nations. Often considered to be a second-generation fighter aircraft, the Mirage III experienced a lengthy service life with several of these operators; for some time, the type remained a fairly maneuverable aircraft and an effective opponent when engaged in close-range dogfighting. During its service with the French Air Force, the Mirage III was normally armed with assorted air-to-ground ordnance or R.550 Magic air-to-air missiles. Its design proved to be relatively versatile, allowing the fighter model to have been readily adapted to serve in a variety of roles, including trainer, reconnaissance and ground-attack versions, along with several more extensive derivatives of the aircraft, including the Dassault Mirage 5, Dassault Mirage IIIV and Atlas Cheetah. Some operators have undertaken extensive modification and upgrade programmes of their flights, such as Project ROSE of the Pakistan Air Force.

The Mirage III has been used in active combat roles in multiple conflicts by a number of operators. The Israeli Air Force was perhaps the most prolific operator of the fighter outside of France itself; Israel deployed their Mirage IIIs during both the Six-Day War, where it was used as both an air superiority and strike aircraft, and the Yom Kippur War, during which it was used exclusively in air-to-air combat in conjunction with the IAI Nesher, an Israeli-built derivative of the Mirage 5. Ace of ace Giora Epstein achieved all of his kills flying either the Mirage III or the Nesher. During the South African Border War, the Mirage III formed the bulk of the South African Air Force’s fleet, comprising a cluster of Mirage IIICZ interceptors, Mirage IIIEZ fighter-bombers and Mirage IIIRZ reconnaissance fighters; following the introduction of the newer Mirage F1, the type was dedicated to secondary roles in the conflict, such as daytime interception, base security, reconnaissance and training. The Argentine Air Force utilised the Mirage IIIEA during the Falklands War, but their lack of an aerial refueling capability limited their usefulness in the conflict. Even using drop tanks, the Mirages only had an endurance of five minutes within the combat area around the British fleet.

Mirage IIIO
Single-seat all-weather fighter-bomber aircraft for the Royal Australian Air Force. Single prototype powered by 53.68 kN (12,070 lbf) dry thrust and 71.17 kN (16,000 lbf) Rolls-Royce Avon Mk.67 turbojet engine, but order placed for aircraft based on Mirage IIIE, powered by Atar engine in March 1961. 100 aircraft built, of which 98 were built under licence in Australia. The first 49 were Mirage IIIO(F) interceptors which were followed by 51 Mirage IIIO(A) fighter bombers, with survivors brought up to a common standard later.